This is a post I don't even want to write. I like building things and writing about building things and I generally don't like bellowing to the Internet when something doesn't go quite as well as expected. But the more I've chatted with people about my experience with Comcast Business, the more I realized that it's probably worth writing a bit just to let others know what to expect. So consider this a cautionary tale that gives you some idea of what to look for if you have to deal with Comcast Business.

To give you the brief backstory, I became a Comcast Business customer in May of last year. I had been happily using Comcast consumer internet for a while but there were a couple of things that convinced me that it was time to make the move to business class. The first was the fact that I work remotely and my Internet service is extremely important to me. It is also the way that I communicate with the rest of my team, which often happens over video conference. There were days when I would spend around six hours connected via video conference to our Brooklyn office. The other thing that convinced me was the fact that Comcast had recently introduced data caps in the Atlanta area limiting customers to just 300G of transfer per month. Despite how I or anyone else feels about these caps, I knew they were put in place because of people like me who were using more bandwidth than others. However, it's also important to note that I never actually exceeded the 300G in a month. I only came close. I could have stayed on consumer Internet and, in hindsight, I really should have stayed on consumer Internet as it would have saved me a lot of grief and an awful lot of money.

Tip #1: Beware, There is a Contract

When I first contacted Comcast Business about getting a business account, I was put in touch with a salesman (Eric) over email who explained the options to me. The price of the plan is based on speed and whether you are also interested in receiving business phone service. Eric sent me the following graphic and indicated that I just need to select which package best suited me. 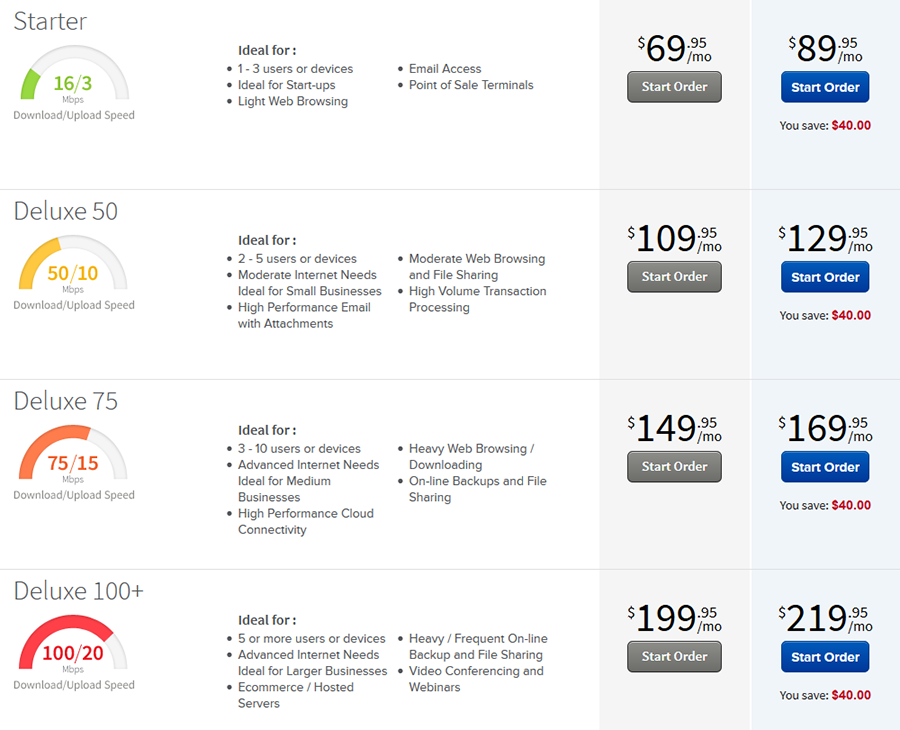 You will notice that the two columns are not labeled. This is how Eric sent them to me and I later found out that the left column is Internet only, the right column also includes phone service. Let me point out a couple of things about this graphic. First, it is copied directly from Comcast Business Plan & Pricing Page. More important is the fact that these prices are predicated on a minimum 2 year contract. That fact is not included anywhere in that graphic and that's usually a thing you don't just exclude from your advertising. I have no idea if it is a thing that can be legally exclude from advertising, but just be aware that the minimum contract term is 24 months. I mention this specifically because this is the first place they nailed me. Eric offered to send me an “order” to schedule the install. What I did not realize until later is Eric sent me a 36 Month contract. Shady on their part, but I really should have scrutinized the document he sent me to sign because it definitely says “36 months.” So first important tip, make sure you get the minimum of 24 months if you have to deal with these guys.

Tip #2: You pay even if they don't give you service

This was the big one for me. So I'm on the hook for a 36 month contract. This is fine by me. Like I said, I work remotely and my Internet service is really important to me. If they continue to give me good service, I'm fine with continuing to pay them. But in October I moved out of Atlanta. In fact, I moved out of Georgia and hopped two states over to North Carolina. During the move, I called Comcast Business to have my service moved. This was when things got interesting. The customer service representative informed me that the area I had moved into was “Charter territory” and that they were unable to move my service. I told her I was kind of bummed because the service had been great in Atlanta. I asked her what I needed to do and her response left me stunned. She explained that even though they were no longer able to uphold their part of the contract, I would still needed to pay them. The best they could offer me was an early termination fee which was right around $2,000! She must have gotten really annoyed with me. I continued to ask the same question in slightly different terms:

The answer, as you might expect, is "Yes". The customer representative claimed that relocation to an unserviced area is explicitly spelled out in the terms of service. It's not. I can't blame her, though, I would have said anything to get off the phone with me.

So Comcast Business got me. They are $2,000 richer and I'm frustrated and unhappy. I can take the blame on being fooled by the salesman shenanigans but I had no way of knowing that Comcast would force me to pay even if they failed to deliver what they offered. Like I said, I work remotely so I cannot simply go without Internet. I had to setup service through Charter even while I continue to pay Comcast. Many others out there will be forced to move to Comcast Business. They're a virtual monopoly so I cannot realistically advise that you avoid them at all costs. They will continue to use data caps to force those of us who use more bandwidth to move to business accounts. If you get forced, I have two bits of advice for you.

For the moment, I continue to pay Comcast monthly for service they will not give me. I am trying to decide the right approach to take. Should I just pay the $2,000 and be done with this nightmare? Or should I find someone who could use good Internet, give them the $2,000 and let someone benefit from my troubles and money? I don't know. But if you have to do business with them, do be very careful.